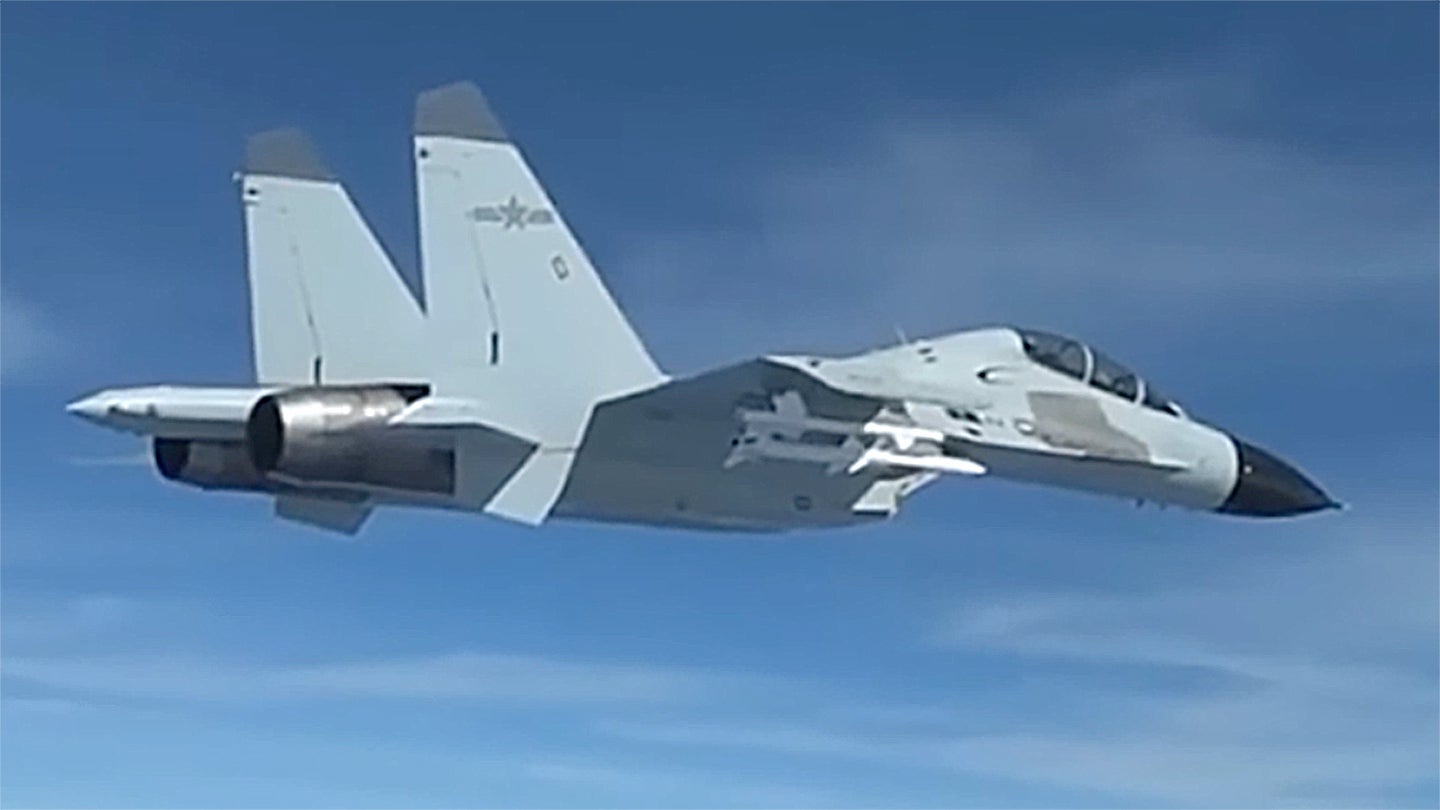 A People’s Liberation Army Navy (PLAN) J-11 fighter jet recently performed what the U.S. is declaring an unsafe intercept on a U.S. Air Force RC-135 surveillance plane in international airspace over the South China Sea, according to a statement released by U.S. Indo-Pacific Command (USINDOPACOM) today.

During the intercept, which took place on December 21, the J-11 Flanker derivative flew in front of the RC-135 and within “20 feet” of its nose, the statement suggests. In addition, an unnamed U.S. military spokesperson also suggested that the J-11 came within 10 feet of the RC-135’s wing, Reuters reports. USINDOPACOM stressed that the “unsafe maneuver” forced the RC-135 to perform evasive measures to avoid a collision.

Video footage of the intercept has been released by USINDOPACOM, which you can view below. It isn’t clear if the video shows all the parts of the intercept being referenced in INDOPACOM’s statement.

Indeed, Robert S Hopkins III, a contributor to The War Zone and veteran U.S. Air Force strategic reconnaissance pilot, also called into question how much of the intercept the video shows, highlighting that the RC-135 doesn’t appear to move.

Intercepts of this sort are not uncommon. Back in 2017, we covered an unsafe intercept on a USAF WC-135W Constant Phoenix atmospheric sampling jet by a pair of People’s Liberation Army Air Force (PLAAF) Su-30MKK Flanker derivatives above the East China Sea. Many other examples exist in recent years and going back decades. Most famously, an unsafe intercept by a Chinese fighter led to the infamous Hainan Island Incident in 2000, when a collision with a U.S. Navy EP-3 Aries spy aircraft resulted in an emergency landing at a Chinese air base and a major diplomatic row. Suffice it to say that, while certain interception tactics can prove dangerous – as an Australian P-8A Poseidon maritime patrol aircraft found out recently when it was damaged by countermeasures launched by a PLAAF J-16 Flanker fighter over the South China Sea – the majority of intercepts don’t escalate to become major incidents.

The video footage does provide a detailed look at a Chinese-built J-11BH – which appears to sport a new, low-visibility color scheme – and its armament at close range.

The J-11, derived from the Soviet-designed Sukhoi Su-27, was first introduced to the PLAAF back in 1998. Built by the Shenyang Aircraft Corporation (SAC), the aircraft is currently in use by both the PLAAF and the PLAN. The J-11BH is a Navy version of the J-11B, which is thought to have first become known in 2010. The Navy variants are land-based, and do not fly from carriers like the loosely related J-15 does.

The PL-8 emerged during the 1980s, with China beginning full domestic manufacture of the missile, as the PL-8A, in the late-1990s.

The more recent PL-12 – which entered service in the mid-2000s and has seen periodic enhancements since then – is loosely analogous to the American AIM-120 AMRAAM, and features medium-range reach and an active radar seeker. You can read more about these missiles and their capabilities in the context of China’s full air-to-air missile inventory in this past War Zone feature.

Of course, the intercept comes within the wider context of increased tensions in the Indo-Pacific as of late. China’s declaration that the vast majority of the South China Sea belongs to the country, along with its militarization of the region, especially via the construction of man-made island fortresses, has resulted in growing friction between Beijing, its neighbors, the U.S. and its allies.

As always, USINDOPACOM stressed the need for a “free and open Indo-Pacific” in response to the intercept:

We will update this post when further information becomes available.

While His Digital Trading Cards Tumble in Value, Trump Says His ‘Cute’ NFTs Were...

Ukraine Situation Report: No Damage Seen At Russian Bomber Base After Drone Attacks

Pirelli UK to resume production from 18 May at reduced...