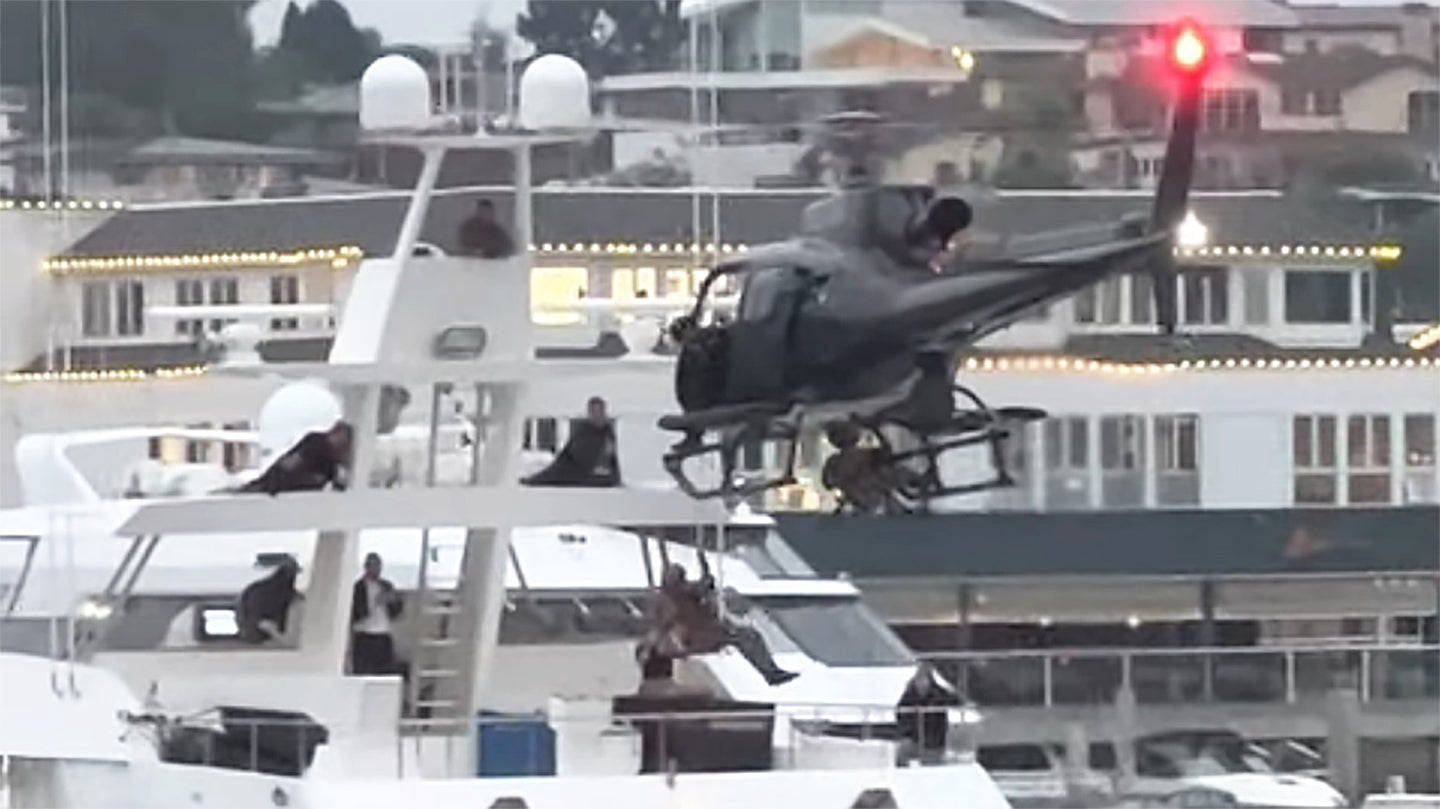 Onlookers could have been forgiven for thinking that the event, which took place on October 14 right in Newport Beach’s Marina, might have been a stunt for an upcoming Hollywood blockbuster or even some kind of U.S. military exercise. As The War Zone has previously reported, Special Operations Command (SOCOM) has performed similar combat demonstrations in the past at Tampa Harbor, Florida as part of the Special Operations Forces Industry Conference (SOFIC) that occurs nearby annually.

When video of the ‘raid’ turned up in our social media feeds, we were taken aback by it as it didn’t seem to be a U.S. military operation, but also there were no signs of it being filmed for Hollywood production. The sight of an aerial ship boarding operation via military-style fast-roping going down at a densely populated marina isn’t something you’d necessarily expect to see. Arguably even more surprising were the highly aggressive flying techniques on display during the demonstration, including low-level, high-speed flying near the boat all in a relatively ‘confined’ space. Footage of the display was captured by several onlookers at the Marina, including the following five-minute video posted to YouTube by the user Your Saltwater Guide.

Obviously, something like this happening in such a highly trafficked not to mention affluent area would draw a lot of questions. As it turns out, the demonstration was organized for guests attending a fundraising dinner aboard a luxury yacht in aid of the SEAL Future Foundation (SFF), a charitable organization designed to help veteran Navy SEALS navigate the challenges of reintegrating back into civilian life after their military service comes to an end.

According to Jonathan Wilson, SFF’s CEO, the organization aims to help veteran SEALS achieve “a successful personal and professional transition” into civilian life by providing career development and educational programs, along with wellness, mental health, and family well-being services.

In the video, we see a helicopter – an AS350 B3E registered to Hollywood AStar, a private company that hires out its AS350 for aerial work in the entertainment industry – hovering above the rear deck of the luxury yacht Chrion, on which the fundraiser took place. Two personnel fast-rope down to the yacht’s deck as the helicopter maintains its position. The AS350 proceeds to lift as the two individuals, equipped with what appear to be assault rifles, begin sweeping the sides of the vessel. The individuals also supposedly performed an internal sweep of the yacht after landing, although this was not captured on film.

Then, a third individual begins to maneuver out of the helicopter, dangling in the air as the aircraft slowly descends. Displaying amazing levels of control, the pilot safely allows the individual to lower themselves onto Chrion’s rear deck.

If this wasn’t impressive enough, the pilot then begins circling Chrion before performing a slow descent down to the yacht’s bow deck – maneuvering the helicopter close enough to the yacht that two individuals were able to casually hop aboard while the aircraft was still hovering. After dropping off the two individuals, the AS350 returns to circling the yacht in a very aggressive manner.

Shorter clips, including footage of the initial fast rope and the helicopter circling the yacht, were also posted to YouTube by the same user. Below, a video of the AS350’s final descent was captured by an individual from a different vantage point at the Marina.

Active Crisis Consulting (ACC) – a veteran-owned security solutions company whose current Managing Director, Neil McLean, is a retired Navy SEAL – says that it sent members of its Special Tactics Training Team (STTT) to execute the exercise for the fundraiser.

According to ACC’s website, STTT members provide high-quality special tactics training to U.S. government and U.S. agency clients (alongside foreign governments and agencies) across a range of areas – including executive protection, explosives training, as well as land, air, and maritime operations.

Speaking to The War Zone, McLean confirmed that no active-duty SEALs were involved with the demonstration and that three of the four operators were contractors with ACC. McLean also noted that the three contractors affiliated with ACC normally train law enforcement agencies throughout the U.S. in close-quarters combat (CQC) and hostage rescue operations. Moreover, he revealed that the pilot who flew the AS350 is a stunt helicopter pilot who has worked on many well-known Hollywood films (but whose identity was not stipulated for privacy reasons).

While the event was undoubtedly a spectacle for those at the Marina to behold — it must have been like being dumped into their own live action movie — it was also an eye-catching way of promoting the charitable work of SFF and raise funds in the process.

All told, as McLean told The War Zone, the fundraising dinner generated $1 million in donations to support SFF’s mission.